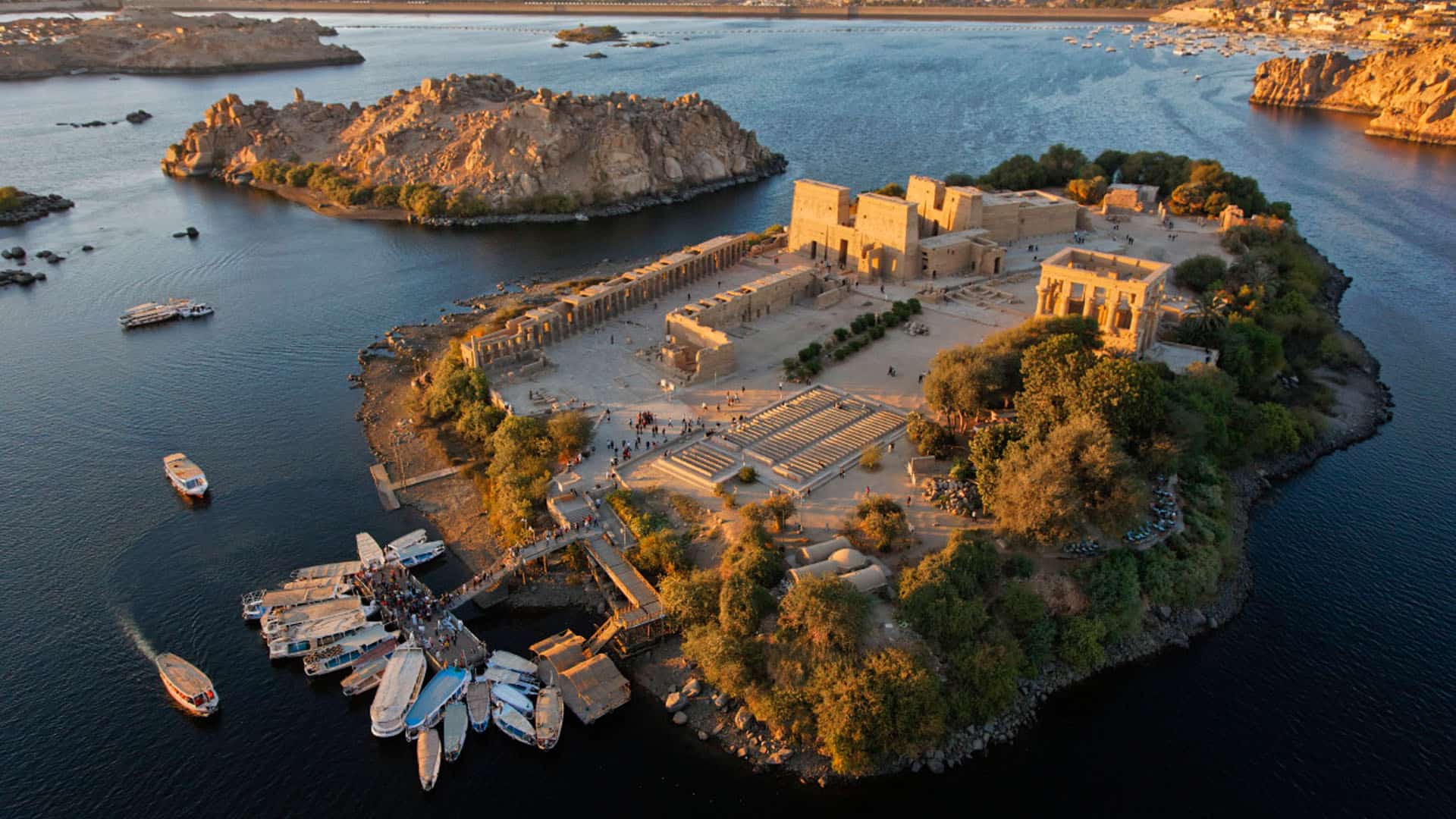 This small island, an alluvium-covered rock of granite, it’s about 460 x 150 m, it is situated in Aswan about 8 km south of Aswan dam, in an area which in ancient time made out the border with Nubia. In its vicinity are a few other islands like Bideh, Sehel and el-Heisa. It called” the Island in the Time of Ra, Philae comes from the Egyptian Paaleq or Pilak, meaning the End or Remote Place. The earliest building on the island of Philae was a small temple to Isis built in about 370 BC by Napktnebef Kheperkare (Nectanebo I). In spite of the discovered of the granite base that located nowadays behind the second pylon of the main temple of Isis that date back to the reign of Taharqa (690-664 B.C) the king of the 25th dynasty. Also the great temple of Isis that was built by the Ptolemaic kings, later had additions of some Roman emperors.

Philae was one of the last outposts of Egyptian religion, surviving two centuries after the Roman Empire converted to Christianity. The sacred island attracted many Greek and Roman pilgrims, who came to pray for healing from the mysterious Egyptian goddess Isis. Even after their defeat by Emperor Marcian in 451 AD, Nubian priests were permitted to make offerings to Isis on Philae.

The temples of Philae were finally closed in 535 AD by order of Emperor Justinian Some of the chambers were converted for Christian worship and a Coptic community lived on the island until the coming of Islam.

In the 18th and 19th centuries, Philae was renowned for its beauty and became a popular tourist destination for well-to-do Europeans. But with the building of the Aswan Dam, the island was submerged for most of the year and Philae began to lose its charm. The gray coloring of the lower part of the temples still shows the effect of their annual immersion during this period. When the High Dam project threatened to engulf Philae completely, the temples were saved by a great international rescue operation sponsored by UNESCO, which took place between 1972 and 1980.

The island of Philae was surrounded by a cofferdam and drained, while a new site was prepared on the neighboring island of Agilka. The temples were broken up into sections and carefully numbered, then re-erected in the same relative positions on Agilka. Two Coptic churches, a Coptic monastery, the ruins of a Temple of Augustus, and a large Roman city gate were left where they stood on the submerged island of Philae and not transferred to Agilka. It is hoped to recover them at a later date. According to the myth, this site was the place where Isis found the heart of her husband Osiris when his body had been torn to pieces and speared out over the country by his brother Seth.

It is also said that she buried him on the neighboring island of Bigeh. So that according to the convention of the ancient Egyptians, the inundations of the Nile were coming from this place where Osiris lied. These words meaning that the importance of this island back to the existence of Osiris, but in fact over the years his wife beginning to take the first position in the place and attracted the limelight not only from her husband but also from god Khnum the major god to the place. So that it is logical to found the main temple of the island dedicated to the goddess Isis.

Feel Free to contact us at any time we are always available , and ready to assist you

No products in the cart.